About WaveLAN
Components
What you need [requirements]

R1,R2 Trimpots? under top board

WaveLAN provides cable-free departmental local area networking for personal computers. This gives you the flexibility to relocate people and equipment, or to add more stations to your network, without the planning effort and cost of re-cabling.

Figure 1-1
WaveLAN in the office

The WaveLAN Network Interface Card (NIC) and driver software have been developed for use with common industry-standard networking systems including Novell NetWare and systems supporting the Network Driver Interface Standard (NDIS).

The WaveLAN adapter kit contains the basic set of components required to install WaveLAN in a personal computer. It includes: 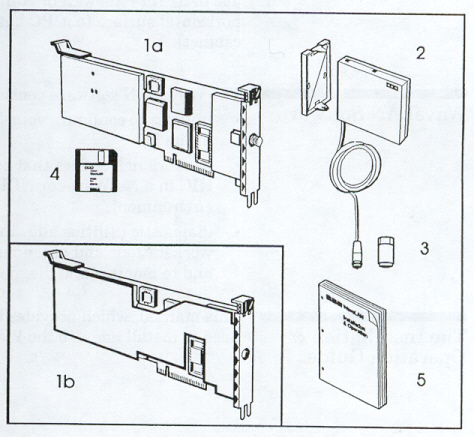 The Network Interface Card (NIC) is a printed circuit board which acts as an interface between your personal computer and the rest of the network. The NIC is installed in a board slot inside the PC. It contains a radio-frequency modem in addition to the circuitry needed to process the signals exchanged between your PC and other stations on the network. The NIC also contains sockets for the optional Boot ROM and Encryption features.

The Omni-directional Antenna module attaches to the NIC via a short coaxial cable. The module is accompanied by a mounting bracket which you can use to fix it to the wall or stand it upright on a flat horizontal surface (e.g. PC base, desktop or filin g cabinet).

The WaveLAN software consists of:

This manual, which provides the information you need to install and use the WaveLAN card.

To install a WaveLAN network station, you must have the following:

Install optional features on the WaveLAN Network Interface Card, install the card in a personal computer, and configure the Micro Channel system. Connect the antenna. This step is described in Chapter 2.

Run the Configuration Setup Utility to create a Card Configuration diskette. You need to do this only once per network. This step is described in Chapter 3.

Install or generate a network driver. The procedure is different for each network operating system.

Use the MSDOS Diskcopy command to create a working copy of your WaveLAN diskette. Use your working copy in all card configuration and driver installation procedures. Store the original file in a safe place.

This section explains how to prepare the WaveLAN NIC before you install it in your PC. Preparation includes installing optional features and setting the hardware configuration switches.

Optional features which you should install before placing the card in the PC include:

A - Security Chip
B - Boot ROM

If you are going to install The Remote Boot ROM on the WaveLAN card, proceed as follows:

If you are going to install the Security Feature, proceed as follows:


Installing the Interface Card in your Personal Computer

The following directions apply to most PCs. See your PC owner's manual for more details on how to install an adapter board.

Static electricity can severly damage the interface card or any other boards in the PC. Before attempting to insert the card into the PC you should make sure to discharge the excess static electricity from your body. You can do this by touching an earthed metal surface such as the chassis of your PC (before unplugging the power cord).

Refer to your personal computer owner's manual for specific instructions about removing the cover.

To connect the antenna to the 2.4 GHz card, simply push the cable end connector on to the connector situated in the middle of the card's end bracket until it clicks into place.

Figure 2-6
Attaching the Antenna to the 915 MHz card

The antenna performs best in an open environment with as few obstructions as possible. Signal strength can be significantly affected by closeness to metal surfaces and, to a lesser extent, by concrete walls, thick masonry walls and solid high-density materials. To ensure the best performance: 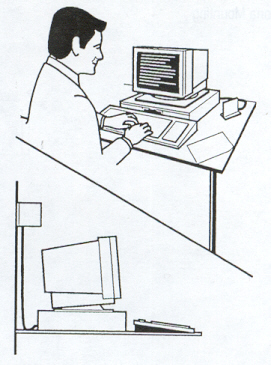 The antenna module is constructed to snap to its support bracket in one of two positions (see Figure 2-8).